When you go ski touring you experience a special aspect of the mountains. Total peace and quiet, untouched winter landscapes and impressive views. Find the right touring skis for pure ski touring pleasure.

Fantastic powder snow, breathtaking views and dreamlike solitude – a ski tour in the Austrian mountains promises just that. Away from the hustle and bustle on the ski slopes, ski tourers enjoy the winter landscape and the downhill runs covered in deep snow on untracked slopes.

For a unqiue experience in the mountains, we have collected some useful information and tips for you: 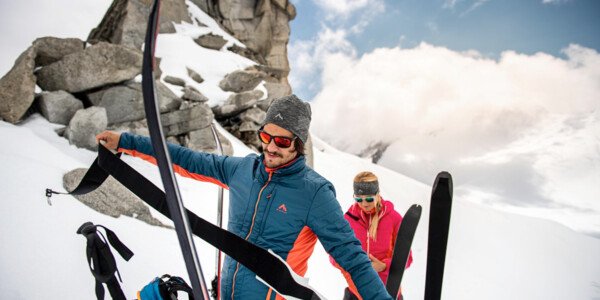 Which equipment do I need for a skitour?

Climbing skins
For the ascent, special “skins” are stretched on the underside of the touring skis, which prevent them from sliding back.

Ski touring binding
The high walking comfort is provided by a special ski touring binding which is clearly different from that used on alpine skis, because it is not only lighter, but also allows the foot to be lifted when walking. For the downhill run, the touring ski boot is fixed in place with very little effort. The binding is the biggest difference between touring skis and alpine skis.

Touring ski boots
With regard to shoes, a distinction is made between ascent and descent oriented models. It is important that they fit perfectly so that you can fully enjoy the ski tour.

Touring skis
While alpine skis are rather heavy in order to be able to lie full on the slope, touring skis are significantly lighter in weight. Depending on whether the touring skis are used more for the piste or off-piste, their width and handling characteristics may also differ significantly from normal skis. Before you hire touring skis from INTERSPORT Rent, their edges are of course sanded and the base is waxed.

Safety equipment
Safety first! If you are planning a tour in open terrain, you should not forget the right avalanche equipment. An avalanche transceiver, avalanche shovel and probe, and an avalanche backpack are essential for off-piste tours.

Multifunctional clothing
Your clothing should be light and breathable on the ascent and protect you from cold and wind on the rapid descent. The magic word here is the so-called onion principle. Combine several layers, so you can easily put on or take off one layer.

Downhill or ascent oriented, light or heavy, etc. - you can quickly lose the overview over these questions. If you want to try ski touring for the first time, you don't have to ask yourself these questions alone. Just tell our Rentertainers about your planned tour and goals. They are experts, can advise you and find the right touring equipment for you.

What should I consider before my first ski tour?

Start small
If you are planning a ski tour for the first time, it is advisable to start with a ski tour on the piste. This way you can familiarise yourself with the movement sequence, gain your first experience with the equipment and learn the correct technique.

When can I start a tour in open terrain?
When you have completed a few piste tours and have acquired extensive knowledge in the areas of avalanches, first aid, tour planning etc., you can start out into the open terrain. But even here you should choose an easier route at the beginning. It is a good idea to do a ski tour with an experienced mountain guide. They can show you helpful tips and tricks. There are also many interesting courses about safety and avalanches, where you can acquire the necessary know-how.

The right technique
The key to the summit: move smoothly and evenly. When ascending, you should take long steps and not lift your touring skis too far off the ground, this saves strength! The distance to the front companion depends on the slope's gradient. The steeper the slope, the more distance you should keep.

The kick turn: From a gradient of about 30 degrees, the so-called kick turn technique is used. In zigzag form you walk up the slope. The first step is to take a good standing position, where you can turn around easily. You can stabilise your position with the poles. The next step is to shift your weight on the valley ski. Now you can turn the mountain ski around like a sweeper. Reposition the touring poles to stabilise your position. Finally, shift your weight to the newly placed ski and adjust the second ski.

Beginner or advanced? You would like to try ski touring, but the thought of buying expensive equipment right at the beginning puts you off? At the INTERSPORT Rent ski hire shop you will find high-quality touring skis and touring ski boots for hire. Our RENTertainers will also be happy to explain to beginners what you need to know about special ski touring bindings and how to put the skins on the touring skis. In addition, the ski hire staff know exactly which touring skis are particularly suitable for beginners. Also advanced ski tourers will find the perfect equipment at INTERSPORT Rent.

You can see if your favourite INTERSPORT Rent Shop has touring skis for hire by entering the location and rental period in the blue box. Alternatively you can also contact our ski hire staff directly.